In memory of Jules Gross, loving father and father-in-law of Jonathan, Adam, Lauren, and the late Marjorie Gross. Dear brother of Dr. Allan Gross, and Sheldon Gross and the late Corrine Rice. Devoted grandfather of Connor, and Madeleine.

Our most sincere sympathies to the family and friends of Jules Gross.

To make a donation In Memory of Jules Gross, please click here… 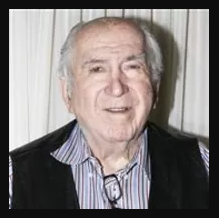 The Kerry’s Place community is mourning the death of Jules Gross, one of the organization’s ‘founding fathers’.

Gross was one of a handful of parents who came together in 1971 to figure out what to do for their children who had a diagnosis that wasn’t well understood back them.  At the time, his son Adam was in a program at Bradley Hospital in Rhode Island and his wife was dying of cancer.  The family wanted Adam closer to home.  A story about the family was on the front page of a section of the Toronto Star and it contained an appeal to other families of children with autism to get together.

The group knew that getting supported housing for their children was the main goal.  Many meetings and much fundraising later, Kerry’s Place was incorporated in 1974.

There were very few organizations in North America that specialized in autism at the time, and the idea of group homes was still pretty new.

“Jules was a successful businessman,” Hart recalls.  He had good connections with other successful people in the community and their fundraisers enabled Kerry’s Place to buy some of the first few homes.

Gross served several terms on both the OSAC and Kerry’s Place boards of directors, including terms as Chair.  He did everything from community meetings when a new home was purchased to outreach with politicians, whose support was essential.

“But he never lost the human touch.  That was the most important thing about him,” Hart says.  “He was very funny and a gregarious bear of a man.”

His humour – and his trademark Rolls Royce – are being remembered by many.  Jim Preston, the retired Chief Operation Office recalls before joining Kerry’s Place going to a meeting to discuss Kerry’s Place taking over to group homes in Mississauga which would become Drew’s Place (one of the early homes in the area).  “I got to the group home and in the driveway was the biggest Rolls Royce I had ever seen.  I remember thinking to myself – who are these people?”

Many others who served on committees with Gross during the 1980s and 1990s have stories about the cigar-chomping man who asked tough questions – with a smile.

Gross is also remembered as a devoted father to Adam who has been a resident at Kerry’s Place supported independent living homes for almost 50 years.

Christine Park, who was an executive director at Kerry’s Place through many of those years, says she first met Adam when he did a presentation at her high school.  It changed the direction of her life.  Soon she began volunteering at Adam’s Place, one of Kerry’s Place first group homes, then named after Adam, and ultimately got hired.  “When happy, Adam would often say a word that sounded like ‘gretestdad’.  I didn’t know what it meant but I would repeat the term back to Adam when he was missing his mother, because it made him smile.  When I asked Jules about the term, he told me that one year Adam gave him a trophy stating World’s Greatest Dad, which Adam read and adopted as ‘gretestdad’.  A well-deserved trophy and fitting description of Jules – a bear of a man but mostly a well-loved teddy bear.”

Park says Gross was also a “phenomenal advocate for people with autism to be involved in the community.  He took Adam everywhere, whether it was a 5-star restaurant or somewhere else. If people didn’t like the noises he made, Jules didn’t care.  He was so proud of his son.”

Gross’ son Jonathan, who now serves on Kerry’s Place Family Advisory Committee, says his father initially got involved with Kerry’s Place as a continuation of the work begun by his late wife Corinne, who died of cancer when Adam was very young.

“He was very modest about what he did at Kerry’s Place.  I think my father is a lesson of how it’s important to not come in with your own agenda but to be aware of everyone else’s.”

Gross also leaves his daughter Lauren and two grandchildren.  He died July 1 at the age of 98. 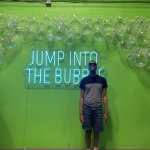 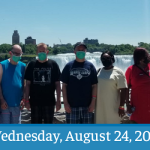